On winning and losing 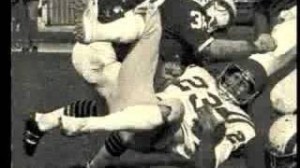 What makes the difference between winning and losing?

Really it boils down to a bunch of factors, really too many to even cover in one sitting. There are a few things though that make us able to determine why we may be winning or losing. Myself ,personally, I think I would be an anomaly. I go into situations thinking of the worst possible outcomes and imagining every terrible thing that could go wrong. This actually ends up working for me most of the time because  it keeps me focused on what I can do to make sure none of that happens. Mentality has a lot to do with outcome in my personal opinion. Time and time again you see successful athletes who have exaggerated egos and some of these people make themselves believe they need to think they are the shit in order to be the shit. I don’t see this as right or wrong just a style and method that some people take. I’ve seen other successful athletes who who act more humble and reserved who think they need to be this way in order stay on top to keep themselves honest.

The truth is everyone loses sometimes and I’d go as far to say everyone wins sometimes.

The latter would almost be like saying even a broken clock is right twice a day meaning there is so much time in between the winning that it becomes inevitable you have to win sometimes if you keep trying. Somewhere along the way you will be able to capitalize on something and make that into a positive. I really don’t think any of us want to have to live that way though. The focus for all athletes and competitors of any kind is winning. While a small percentage of people may be lucky enough to just be born and win all the time from the time they start competing in anything due to natural talent and genetics the fact of the matter is that really just doesn’t happen much. There is much more that has to happen for people to win over and over again.

While some of it may be physical and mental there is a bit of emotional connectivity that comes into play. If someone does not want to compete then it will be evident in their competition. People have to want to win in order to do so even with natural talent. Skills have to be developed and worked on. Don’t believe me? Ask any 7 foot tall person if they are in the NBA. If they aren’t ask them why they aren’t. Then ask them if they are millionaires or rich. If they are good for them, but chances are they aren’t. Now don’t you think if just being born gifted with athletic ability and size was enough that person would choose to be rich having access to the kind of wealth that would fulfill your wildest dreams? That person most likely just didn’t want it or didn’t want to work for it. While injuries will be the majority of reason why athletes of high caliber don’t make it to that next level chances are there are more people who just didn’t want to try for whatever reason than that did.

If winning was that easy everyone would be rich with trophies and belts of all kinds. Winning takes commitment and the most successful people in the world will tell you this. Time and time again you hear about the sacrifices people made to get to where they are. You have to have the emotional capacity to handle winning and being able to make those sacrifices. There really is no ultimate winning in a sense since you will have to sacrifice, but it’s all about what you want. That comes down to what you want emotionally for yourself. Anyone can compete, but not just anyone can compete and win so consistently that it becomes expected. Passion is an amazing thing. It will separate those who are along for the ride from those who want to drive the bus. Some people just want a taste of what competition is like while the winners bleed for winning. Winners breathe for not just competition, but the experience and growth that comes from it. Winners can’t lose, when I say that I mean they can’t let it be that way and they need to find a way to win.

Winners take extra time to pay attention to detail whether it’s in themselves or an opponent. Winners think about what they do…a lot! Winners need to improve and strive for more. Some people who have been winners try to ride the past without the training and almost always will end up falling on their faces. Training and working on progressing is always crucial. If you don’t train to succeed you will be limited in your success. As people become older it may be hard to improve for some physically, but this is where they have to continue to grow mentally and emotionally. If you can keep your emotional composure and learn from all past experiences as a competitor how to become an even greater competitor then you will keep finding ways to win.

Winning and losing can become a state of mind. The mentality that bred between winners and losers can be very real and clear when you start looking at the ideas that drive the person to that mind state. While controlling each and every thought we have may be tough it can be very possible when we practice complete self control. Some people obviously find it easier to adhere to a winning mentality and routine while others may never feel any desire to have habitual patterns that breed success. Plainly put you have to want to win to be a winner. Winning may be relative in terms to each person, but right now being defined by me as competing wherever you may in life and winning that particular competition.

While I train for athletic competition and the athletes I train are striving to win their events, winning and losing comes in more than just athletic endeavors obviously. Success is entirely relative to the individual. So while standards of winning and losing may be somewhat relative to the individual there are common standards that we generally judge success by as a society and within that we are able to impose our judgment of success on each other. I am not saying this is either right or wrong, but it is just how the world works. Me, personally, I judge based on effort and outcome. If the effort to become better isn’t there mentally, physically, and emotionally you are very limited in what you can actually succeed in.

I am a very optimistic person even though I am very realistic. You have to know your boundaries and limits while knowing they can always be pushed beyond what most of us realize is possible. Winning comes in the thoughts you have.

Knowing no matter how hard things may be now that there has to be a chance that they will improve with work and determination.

Staying realistic and thinking critically of how to make your moves count towards progress to get where you want to be.

Always moving forward even when you get pushed back or knocked down.

That is one of the reasons I preach Neverstop…it is a state of mind for me at this point and connects with so many aspects of my psyche it is now a part of who I am. It helps me not only in the long run, but in the moment. Neverstop keeps me honest. As long as we just keep pushing forward with our goals and taking a well rounded approach we can win.
Win or lose never ever stop!